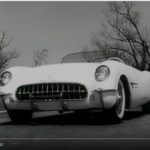 This is a promotional video that details the design and engineering of the 1953 Chevrolet Corvette. It was created prior to the introduction of the production car.

This promotional film from Chevrolet details the design and engineering features of the 1953 Corvette. As it was created prior to the introduction of the production car in June 1953, the car shown is actually the original Motorama Corvette show car which can be easily identified by unique front fender trim and the “Corvette” script on the hood.


⇒  Here are some more articles you might enjoy…

Check out the 1053 Corvette Magazine Ads along with some 1953 Trivia as we look aback in our Rear Vues and see what happened in 1953.

THE SOUL OF THE MACHINE: 50 YEARS OF GREAT CORVETTE POWERTRAINS