Walworth, Wis. -Sept. 11, 2013– Some things are just meant to be, and Mecum and Dallas are like engines and horsepower. As an event that began with an anticipated 1,000-vehicle lineup, the third annual Dallas auction exploded with 1,432 classic and collector cars crossing the Mecum block throughout the four-day event and 986 of them hammering sold. The auction is now in the books as one of the most successful Mecum auctions on record with an impressive overall sell-through rate of 70 percent and sale totals of a whopping $37,913,093, which includes the unsurpassed sale of collector Buddy Herin’s 1967 Chevrolet Corvette L88 Convertible (Lot S123) that brought a healthy $3.2 million.

“Buddy’s collection, as anticipated, was the highlight of the four-day event,” commented Mecum President and Founder Dana Mecum. “His record-setting L88 made history once again, selling for $3.2 million, the highest price ever achieved for a Corvette at auction.”

The L88 is one of just 20 produced that year and boasts an impressive background on the track. Well-documented and extremely well-cared for, the car was offered with the accompaniment of its original tank sticker, vintage race photos and time slips, and the bragging rights of being the winner of the ’67 NHRA A/Sports Nationals at Indianapolis.

In total, four cars from the Buddy Herin Collection offering made the top 10 sales list including his 1969 Chevrolet Camaro ZL1 (Lot S127) that swooped in to occupy the second seat hammering at $530,000. As number 62 of just 69 produced, the highly-optioned ZL1 was the only one to roll out of the factory in its desirable Red-on-Red color combination. Following what quickly became a Chevy-heavy theme in the top 10 sales, number three was Herin’s 1957 Chevrolet Corvette Airbox (Lot S121) that sold for $290,000, with a 2005 Ford GT (Lot S107) and 2008 Lamborghini Murcielago (Lot S110) from the Michael Scott Collection representing the only non-Chevy cars to make the list selling for $255,000 and $230,000 respectfully.

For access to complete auction results and other member benefits, signup for the free InfoNet service offered at www.mecum.com. Mecum’s next classic and collector car auction will be thisOct. 10-12 at the auction house’s newest venue, the Schaumburg Convention Center, and will feature 1,000 vehicles. For more information or to consign a car for an upcoming Mecum auction, visit www.mecum.com or call (262) 275-5050.

About Mecum Auctions
Nobody sells more than Mecum. Nobody. The Mecum Auction Company is the world leader of collector car and Road Art sales, hosting auctions throughout the United States. The company has been specializing in the sale of collector cars for 26 years, now offering more than 15,000 vehicles per year and averaging more than one auction each month. Established by President Dana Mecum in 1988, Mecum Auctions remains a family-run company headquartered in Walworth, Wis. For further information, visit www.mecum.com or call (262) 275-5050. Follow along with Mecum’s social media news and join us on Facebook, Twitter, YouTube, Pinterest and Instagram. 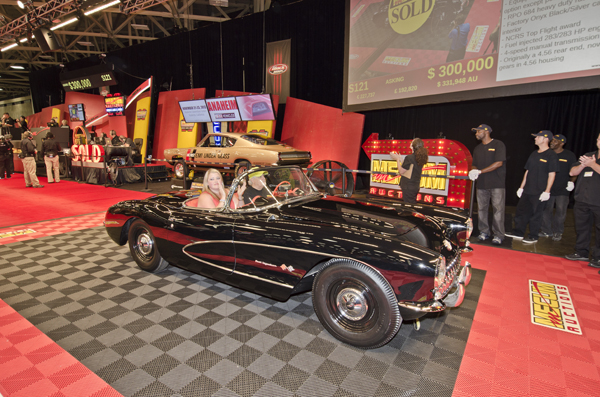