The 1967 Corvette – A Sports Car Ahead of Its Time

The 1967 Corvette Sting Ray sports car has some of the best-known options, specifications, costs, colors, facts, and details of any vehicle in history and deserves to be among the top 10 most famous vehicles in automotive history as well as one of the top collector vehicles in the world today.

Various reasons were behind General Motors’ decision to extend the production of the current model for one more year. One theory was that the release of the C3 had been intentionally delayed to work on the Chevrolet Camaro in 1967. In spite of what critics and enthusiasts predicted, the C2 1967 Corvette Sting Ray wasn’t actually the first of a new generation, but it was the most refined of the second-generation Corvettes.

Throughout this article, we will be discussing the 1967 Corvette Specifications and its pricing, colors, facts, and other details with accompanying photos of some of the best restored and original Corvettes.

How many 1967 Corvettes were made?

What did the 1967 Chevy Corvette cost new?

Our first example of a beautiful matching number 67 Corvette is owned by David and Mary Matlock. The Matlocks received the Vette Vues Magazine’s Tri-Power Award at the Galveston Corvette Chevy Expo. The 38th Corvette/Chevy Expo was held at the beautiful Galveston Island Convention Center, right on the Gulf of Mexico February 27 & 28, 2016.

These are the Sting Ray 1967 Corvette Options that the Matlock’s Corvette Sport Coupe has:

Below you will find a list of the 1967 Corvette Specifications / Options that were available in that model year, as well as the number of cars with these options and the costs:

We also have a pdf of the 1967 Corvette Stingray options.

As we look at the 1967 Corvette Specifications, we want to look at the engine and transmission options.

The base Corvette Stingray in 1967 came with a 327ci, 300hp engine, 3-speed manual transmission, vinyl interior trim, and soft top.

Note: Option L89 – Only 16 were built with the L89 aluminum head option

Corvette Transmissions available in the 1967 Vette:

The soft top colors were black, white, and teal blue.

Our next example of a 1967 Corvette Coupe is owned by Lou Sanchez and is on at the Corvette Chevy Expo in Galveston Island, Texas. Lou’s Marlboro Maroon Corvette has the 427/390 HP option. 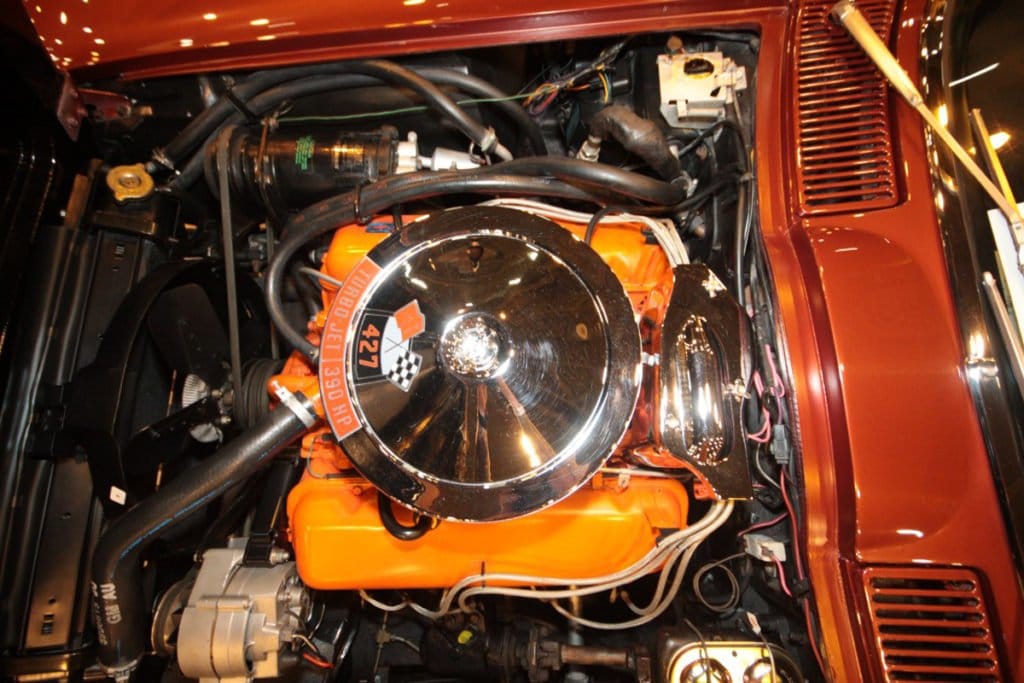 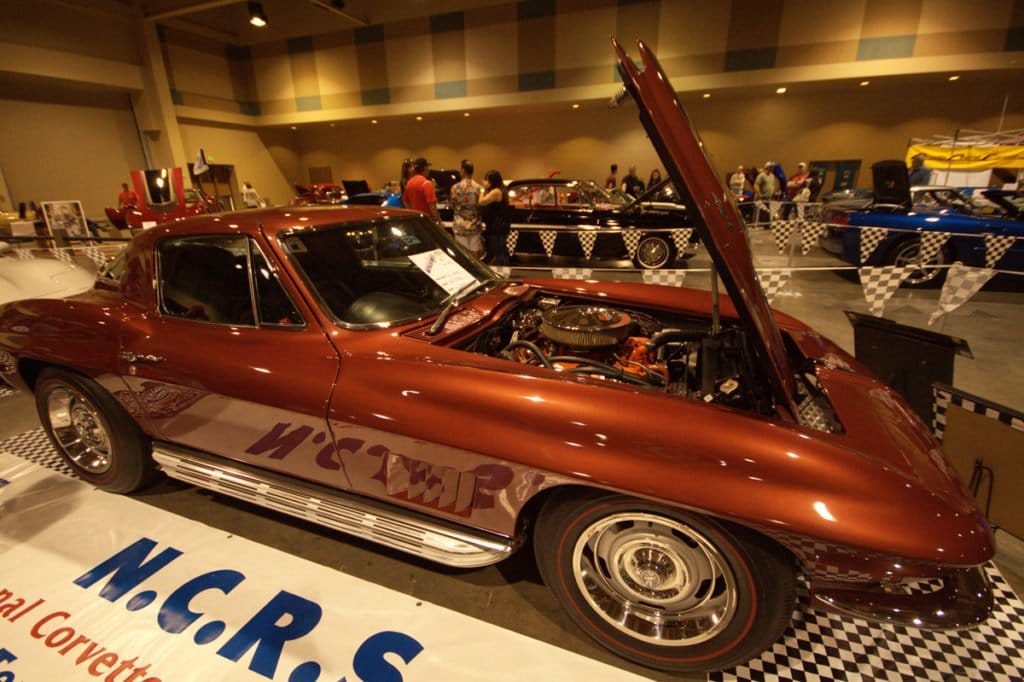 Notice the Side Mount Exhaust System on the 1967 Chevy Corvette.

The NCRS Gallery at Corvettes at Carlisle always has some examples of the way the Corvettes came from the factory. 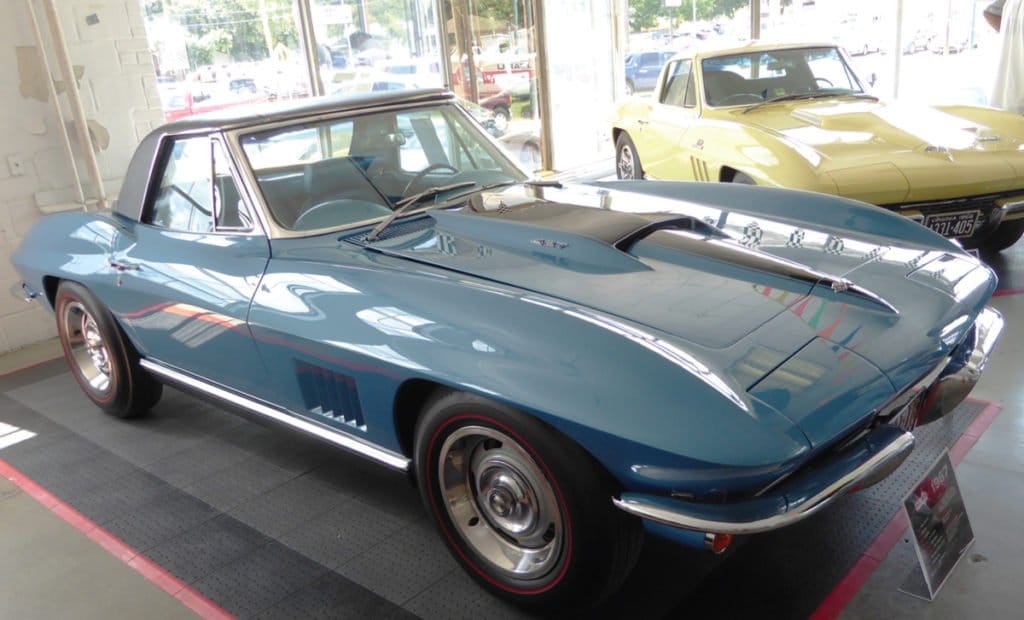 The color on the above 67 Vette is Marina Blue with Black Soft Top with the black vinyl interior. It is on display at the 2015 Corvettes at Carlisle NCRS Gallery. Richard Morgante owns this beautiful convertible 1967 Chevrolet Corvette Stingray. 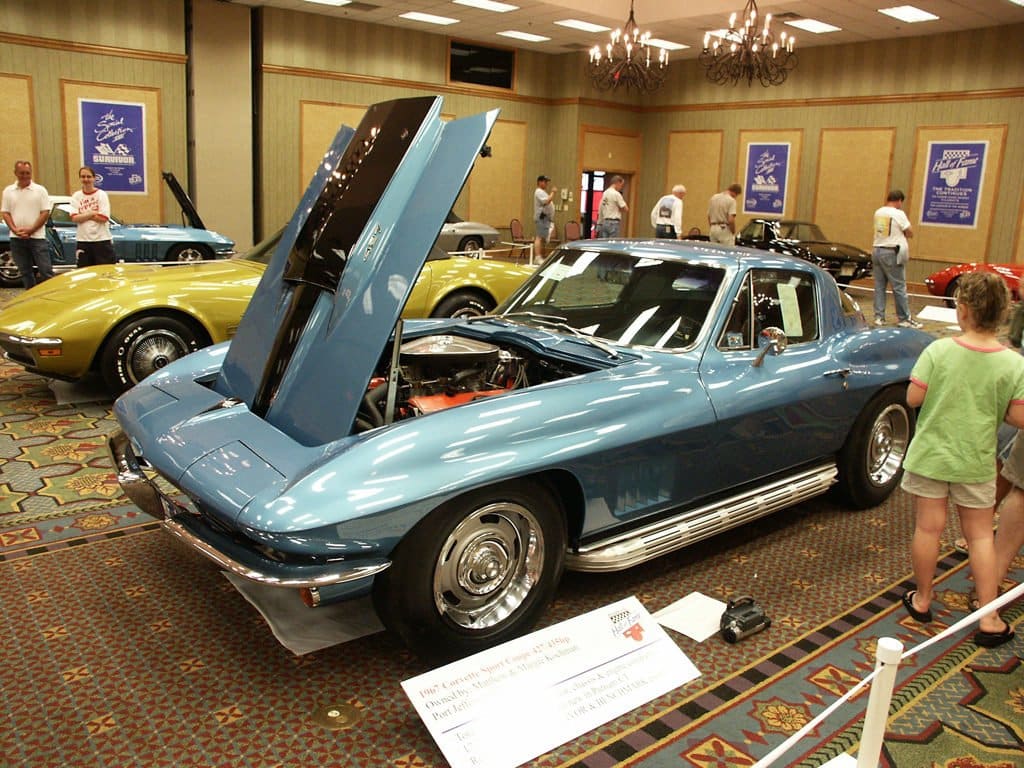 Next is a 1967 sport coupe Sting Ray with the 427/435 hp that is owned by Matthew and Margie Kochman of Port Jefferson New York on display at the Bloomington Gold Corvette Hall of Fame. 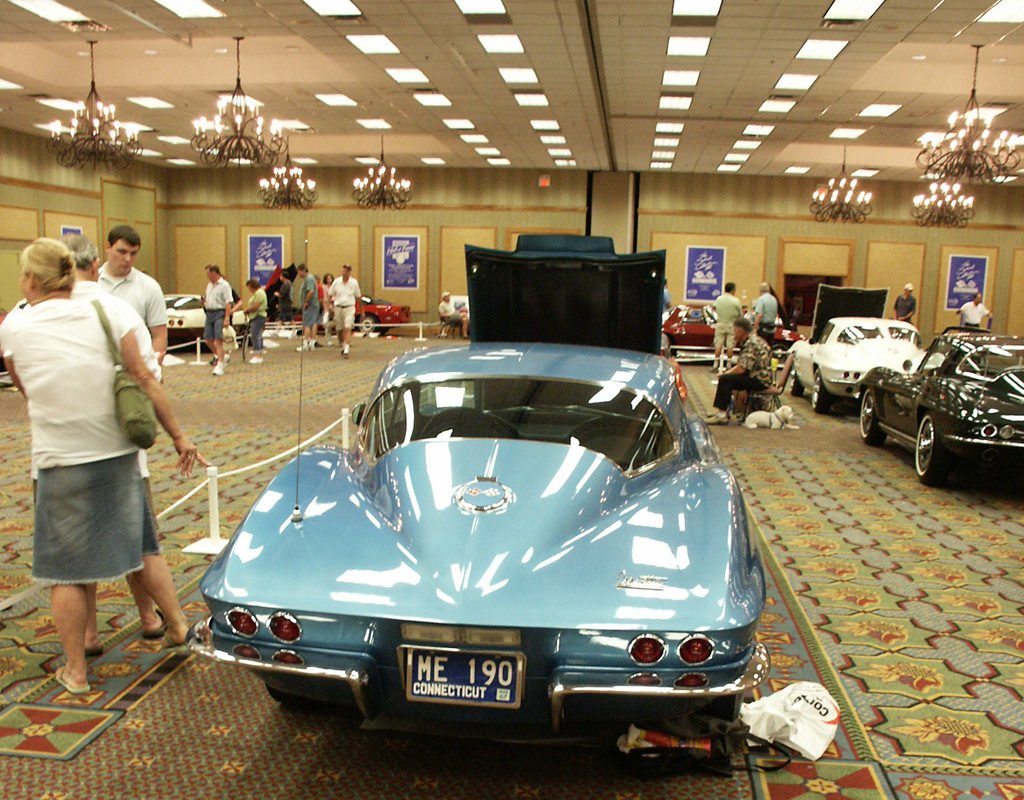 America’s 1967 Chevrolet Corvette was the last of the ‘mid-year’ generation of the iconic sports car and depending on its condition can be worth well over $139,000. According to Hagerty’s website here are the averages as of September 2022.

Then you would add in value for some of the optional equipment on the 1967 Chevy Corvette. You can get an idea of value by looking at the chart above as to how many were sold or a particular option. An example would be that only two were sold with the 36 Gallon Fuel Tank. Rare option = More Value.

But you never know what a Corvette will go for. For example, this 1967 Corvette L88 sold for $3.5 Million at Barrett-Jackson Scottsdale in 2014.

Here are some other blog posts you might enjoy:

The 1967 L89 Corvette made Vete Vues Top Ten Most Desirable PERFORMANCE Corvettes. Check out our article.

Are you looking for a 1967 Corvette for sale? Check out our online Corvettes for Sale Classified Ads.

If you have never seen Vette Vues Magazine you can check out what our subscribers enjoy each month in our Issue Preview.

Are you looking for a gift for a Corvette Enthusiast? Give them something they’ll love every month with a Vette Vues Magazine gift subscription. Subscribe today and give them a gift that lasts all year long.