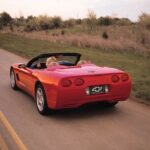 WARREN, Mich. — Chevrolet Motor Division today announced a Manufacturers’ Suggested Retail Price (MSRP) of $44,990 for its 1998 Corvette convertible. The legendary topless sports car adds more than $1,300 worth of premium standard equipment, yet will be priced $635 less than the 1996 convertible (the last year a Corvette convertible was offered).

“Value is Chevrolet’s heritage,” said John G. Middlebrook, Chevrolet General Manager. “Beating the Corvette convertible price of two years ago, while offering an all-new vehicle with more equipment for ’98, means that the customer wins. We’re sure the new convertible will match the success of the all-new coupe introduced as a ’97 model.”

The Corvette convertible adds more than $1,300 worth of premium standard equipment at MSRP for 1998, including:

“The Corvette convertible is more rigid than any of the world-class convertible sports cars that Chevrolet measured during Corvette development,” said Middlebrook.

The new structure provides the foundation for better ride, handling and durability. Improvements to all fifth-generation Corvettes include a new 5.7-liter small-block V8 engine that delivers 345 horsepower and 350 lbs.-ft. of torque, more interior space with improved ergonomics, and new exterior styling that echoes the past and announces the future.

Production of the 1998 Corvette convertible began during July, and is currently ramping up. The best ‘Vette yet will be available in dealer showrooms in September.

Here are some links to other articles on our blog you might enjoy:

The Soul of the Machine: 50 Years of Great Corvette Powertrains

You might also find the Chevrolet Corvette 2004 Product Information Interesting.

If you have not seen Vette Vues Magazine you can check out what our subscribers are enjoying each month in our Issue Preview.