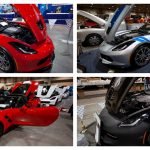 Today on our Vette Vues Blog post, we are looking at 2017 Chevrolet C7 Corvette Stingray show cars.  Everyone has their favorite color and style for their Vette.  Some like stock Corvettes and some like customs.  In this blog post, we’ll look at four stock 2017 Chevrolet Corvettes that are on display at the Corvette Chevy Expo.

Our first 2017 Corvette is owned by Jerry Rodriguez. The photos were taken by Mark Jenkens at the Corvette Chevy Expo in Galveston Island, Texas.

Jerry is a member of the Space City Corvette Club, and he is showing his Torch Red Grand Sport coupe in their club display.

“My 2017 was a gift to myself when I retired in February 2017, after my wife gave me the green light, HAHA… I always loved the Corvette, and of course, I always wanted one. Every year since My wife and I were married, (35 years), She always asked what I wanted for Christmas. I always said A Red Corvette.”

In 2017 Jerry’s dream came true. He ordered the Grand Sport the way he wanted it.

In late April 2017, Jerry took possession of the GS Corvette.

“I keep it stock just because of my past in other sports cars and the problems that arise after you start modifying. So I ordered my Corvette Grand Sport because it has everything I wanted along with the bigger ass end and wheels. The larger rotors, bigger calipers. The GS rims just look better to me compared to the Stingrays.”

Jerry’s son wanted him to get black rims, but being old school and he loved the chrome rims.

“My son and I went to Bowling Green to visit the museum in early April 2017. We also did a factory tour. The tour was eye-opening, and we regret not doing the tour following your car being built.”

Since owning his 2017 Corvette Stingray, Jerry’s friend invited him to join the Space City Corvette Club. This was a good thing joining. Jerry and his wife do many drives and tours with the club enjoying the Corvette. The Rodriguezes have visited other cities along with some car shows including the NCM 25th anniversary.

Looking back at the experience from driving from Text to Bowling Green, Jerry comments, “That was great. We were with the South Texas caravan from Houston. I enjoyed the drive along with the stops we made along with the caravan. That has to be one awesome view to see hundreds of corvettes going down the highway.”

Jerry and his wife Deborah and friends, Al and Janie Rincon, went in 2018 to the Ron Fellows driving school.

“That is an experience that everyone should do. They push the Corvette to its limits and show you what the Corvette can do. The Spring Mountain resort that holds the school is out in the middle of the desert but was a nice venue. The accommodations were pleasant with nice clean rooms. The Dining Hall was equivalent to a four-star hotel with a small menu. The Dining Hall also had a full bar and patio that you can use next to the fire pit and enjoy the desert evening.

“Receiving the President’s award at the Corvette Chevy Expo in Galveston, Texas was a great Honor. I hope to attend the Expo for many years to come.”

Nathan Kranson is not new to Corvettes. As a matter of fact, he has owned eleven Corvettes, of which nine were blue and seven were convertibles.

This 2017 Sterling Blue Grand Sport Convertible was one of seven produced with the specific configuration. The GM Tension Blue upholstery and GM chrome wheels were added to make it a one of a kind Vette.

Nathan received the President’s Award at the Corvette Chevy Expo in Galveston, Texas. He also received the C7 Stock Award Second Place at the 2019 Expo.

Nathan is a member of the Sam Houston Corvette Club in Houston, Texas.

Bridgette is a member of the CIA Corvettes in Action. You can visit them on their Facebook page.

Here are some other articles related to the 2017 Corvette you might enjoy:

We add articles to our blog on a regular basis. You can check our Recent Blog Posts Here.

CHECK OUT OUR SUBSCRIPTION SPECIALS