Design of all kinds such as that of Thatsbrave can be fascinating to look at, but there’s nothing quite like the car industry.
In this article, we’ll look at the Corvette Design Engineering History from the 50s to the 90s and see how designers kept Corvette true to its heritage.

We are looking at the 2003 Corvette Press Kit that was given out to the media at the 50th Anniversary Celebration in Nashville. The press kit included 14 press releases. This on is for Engineering Retrospective/Design and is titled “CREATIVE, GROUNDBREAKING DESIGN HAS LONG BEEN A HALLMARK OF CORVETTE SUCCESS”.

To look at photos and details about the press kit and more links to the press released CLICK HERE.

CREATIVE, GROUNDBREAKING DESIGN HAS LONG BEEN A HALLMARK OF CORVETTE SUCCESS

MONTEREY, CALIF. – The Corvette always has been a design trendsetter. No matter which generation, its bold, curvaceous shape is uniquely, unmistakably Corvette, never to be confused with another. The long flowing lines, voluptuous, round fenders, quad taillights and the once-maligned split window are but some of Corvette’s trademark cues. Remaining true to the heritage always has been a priority for Corvette’s designers, and is quite evident when looking at 50 years of Corvette.

When it first debuted in 1953 at the GM Motorama at the Waldorf Astoria in New York, the Corvette immediately made a huge impression. The breakthrough 46-piece fiberglass body, nearly devoid of chrome in an era of maximum brightwork, the two-toned exterior, the silver shark’s-tooth grille, the silver mesh headlamp covers and the sleek styling added up to an elegant package. It retained this basic design for several years and then underwent a redesign that featured quad headlamps with chrome bezels, a louvered hood, and wraparound bumpers. 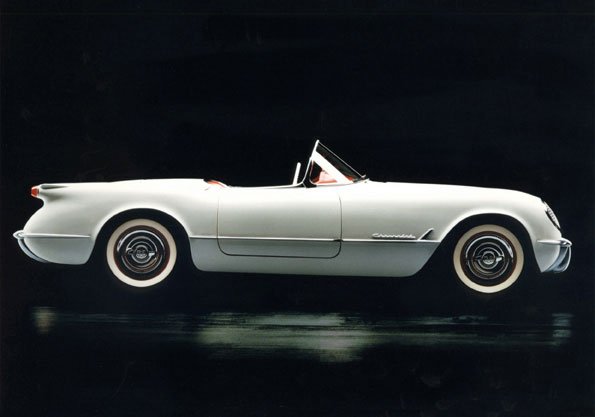 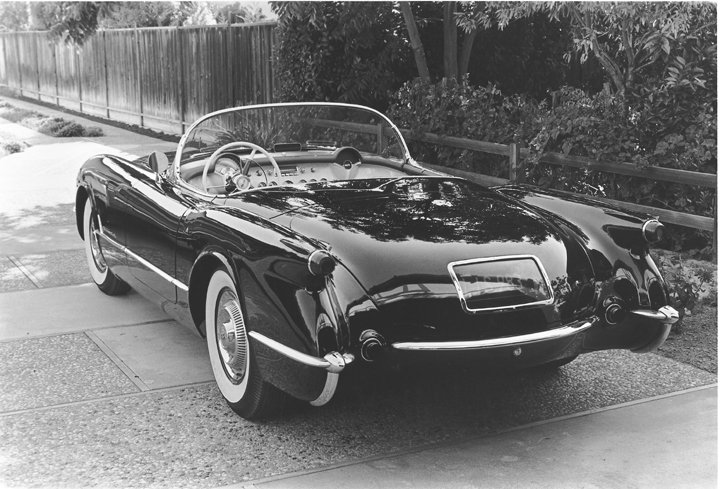 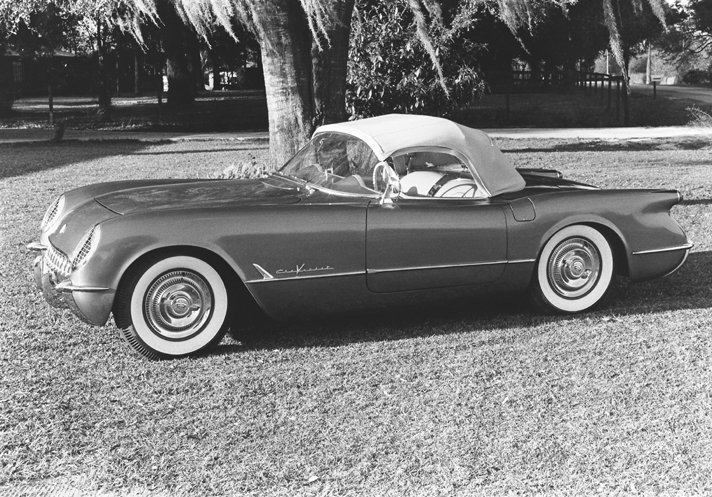 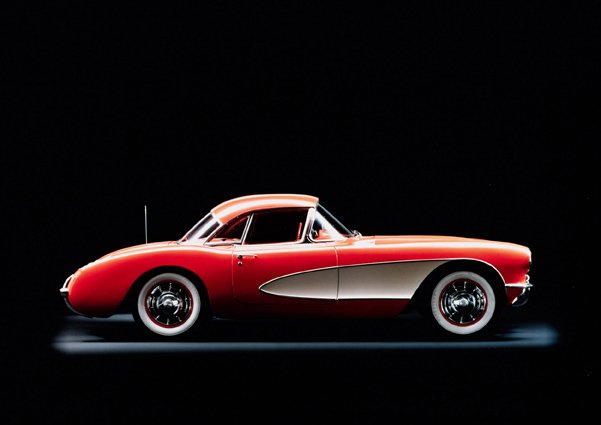 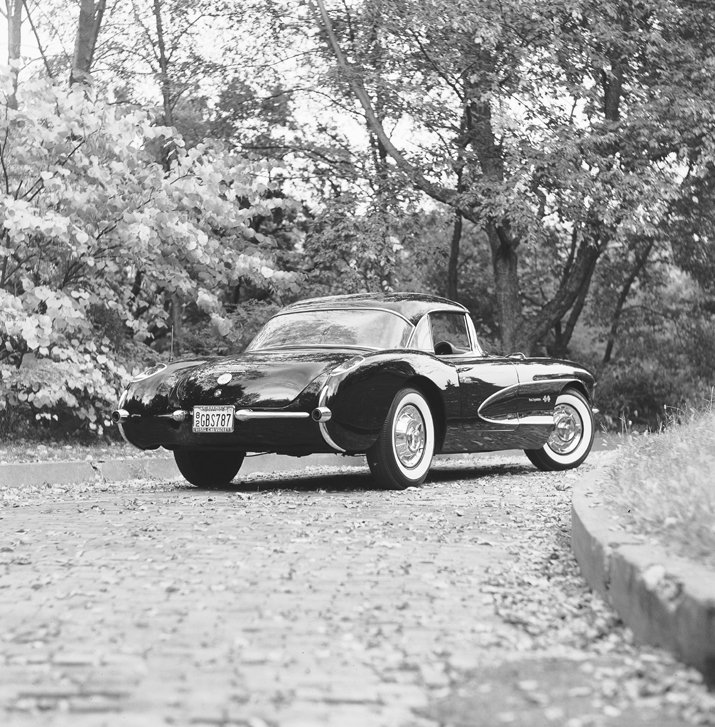 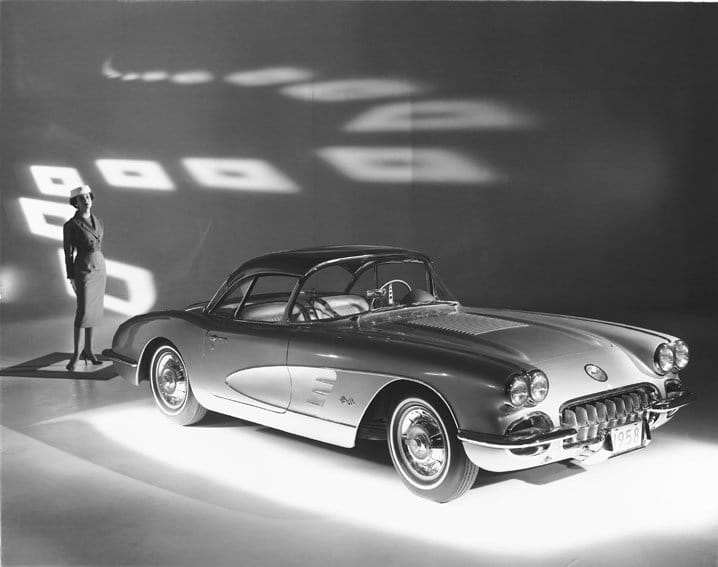 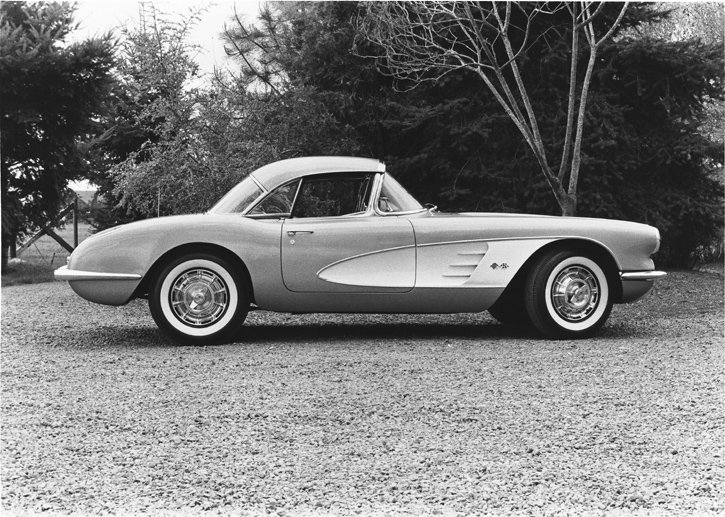 By the time the 1960 model debuted, the Corvette was almost entirely chromeless. During this decade, GM’s stylists tweaked the design nearly every year, giving just about every model year a fresh, distinctive look. The model year 1960 brought standard blackwall tires and the end of the shark’s tooth grille. A blacked-out chrome mesh screen replaced it, and then, in 1963, thin, horizontal grille bars graced the front end that remained until ’66. A ducktail rear end offered more trunk space.

Engineers designed the first CERV-I experimental model in 1962 that pushed the boundaries of Corvette design. Two-toned paint excited by 1962, and the trademark hidden headlamps appeared in 1963. The model year 1962 also brought the Bill Mitchell Mako Shark I, which led to the controversial split rear-window ’63 Sting Ray coupe. At the time, critics derided the split window for its limited visibility, but today, these models are among the most highly coveted, collectible Corvettes. The ’63 model marked the first time the car came as a closed coupe, and it featured a sleek, aero look and the introduction of hidden retractable headlights. The Grand Sport Corvette racecar debuted in 1963.

In 1964 the split window disappeared and was replaced by a new one-piece window. Designers also removed the faux air intakes in the hoods and the functional air-exhaust vents on the pillar. In 1965 Chevy showed the Mako Shark II. Built on a Sting Ray chassis, with styling similar to Mako I, the II had a lower stout and shorter tail. It proved to be one of most famous Corvette showcars and the Sting Ray forerunner.

The following year, an eggcrate insert replaced the horizontal grille bars, and Corvettes gained ribbed rocker moldings and a side mounted exhaust system option and, in 1967, the last of the Sting Rays rolled off the line.

In 1969 Chevrolet resurrected the Stingray name, now as one word. The Mulsanne show car appeared, with high, side view mirrors and exposed headlights. It paced the Can-Am race series. 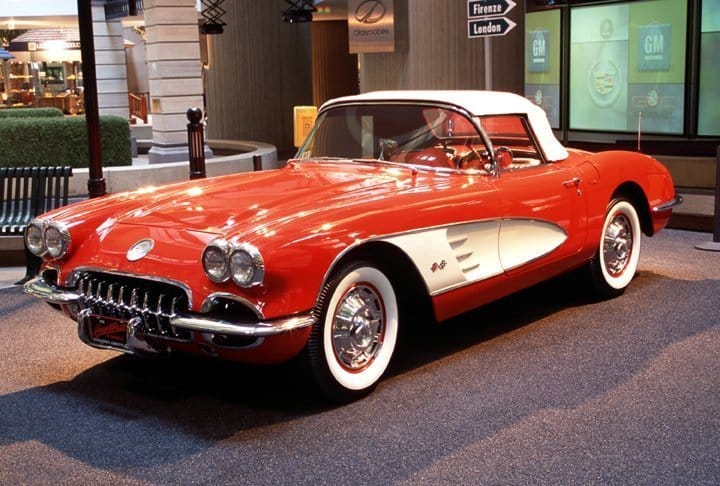 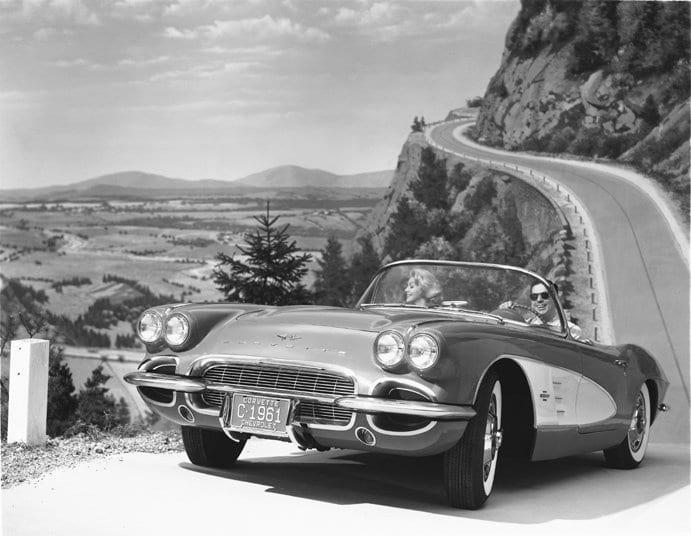 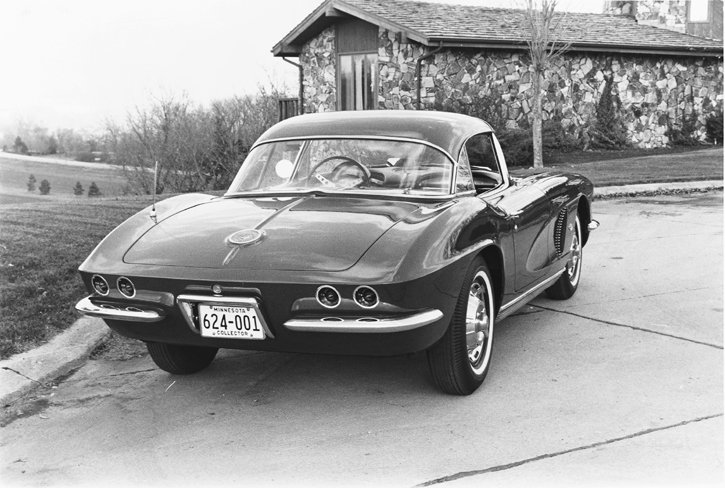 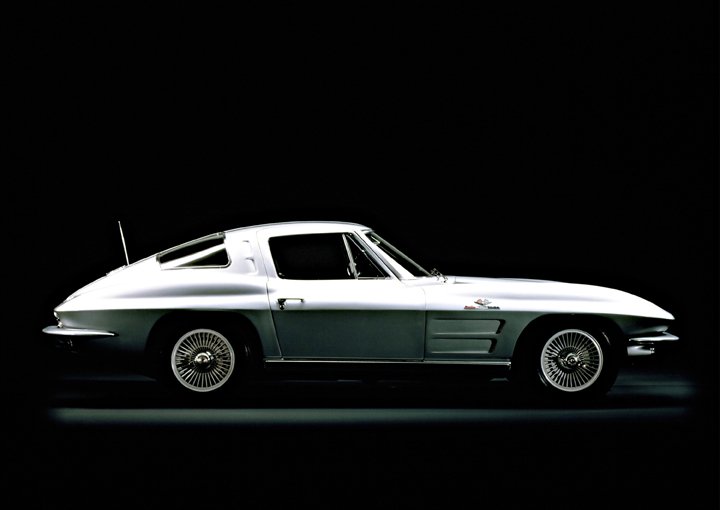 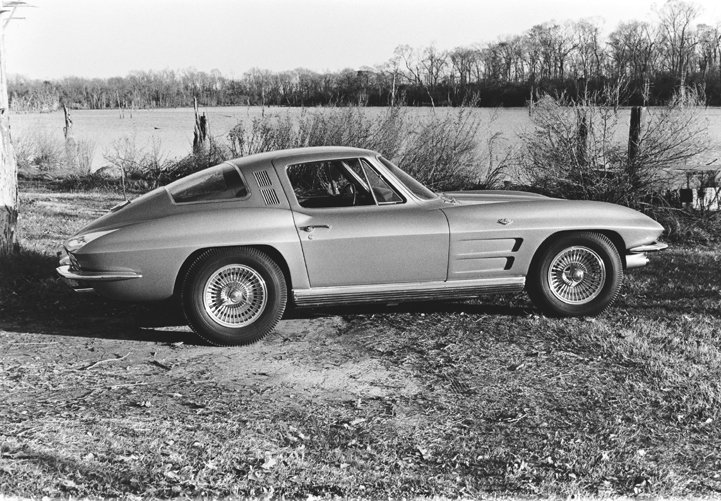 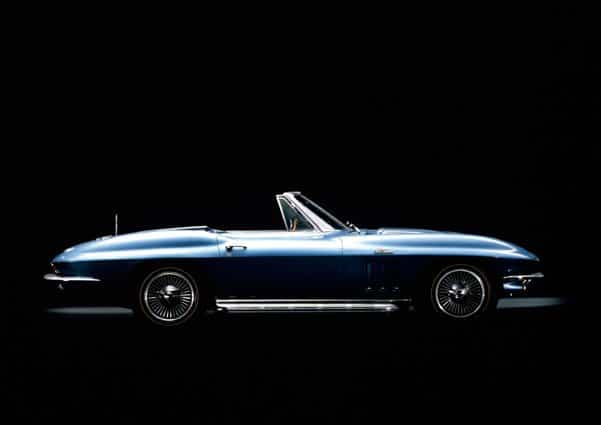 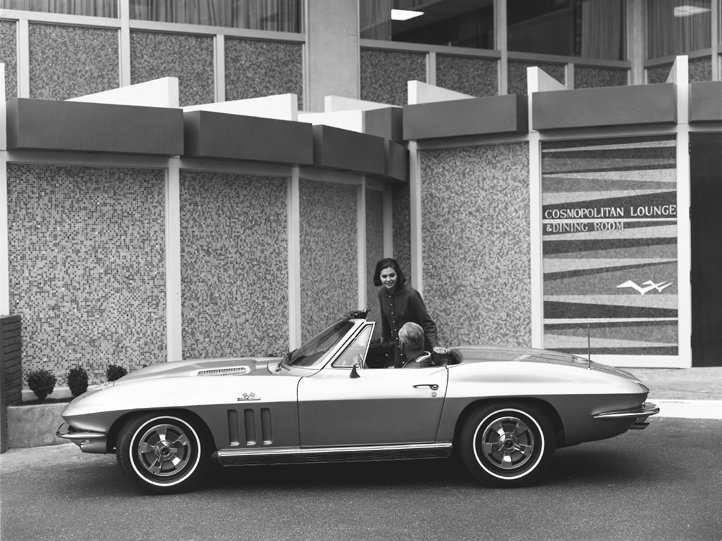 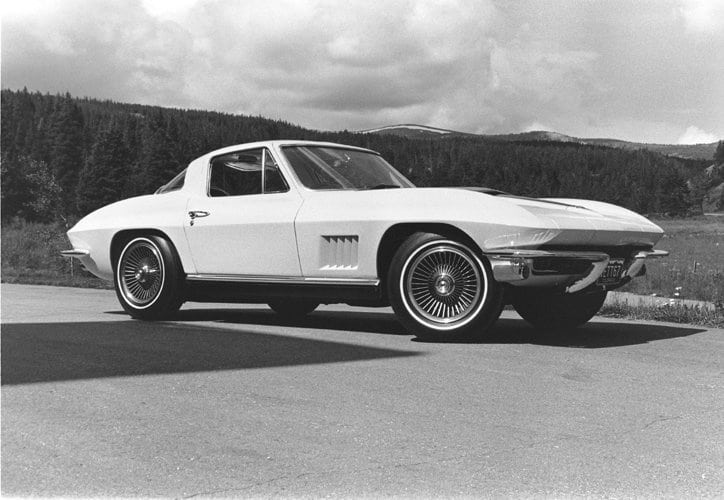 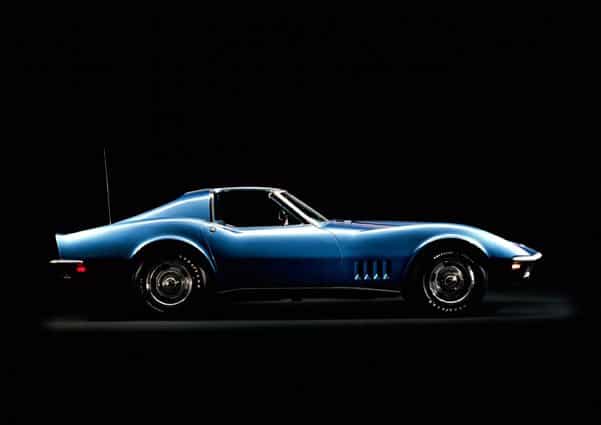 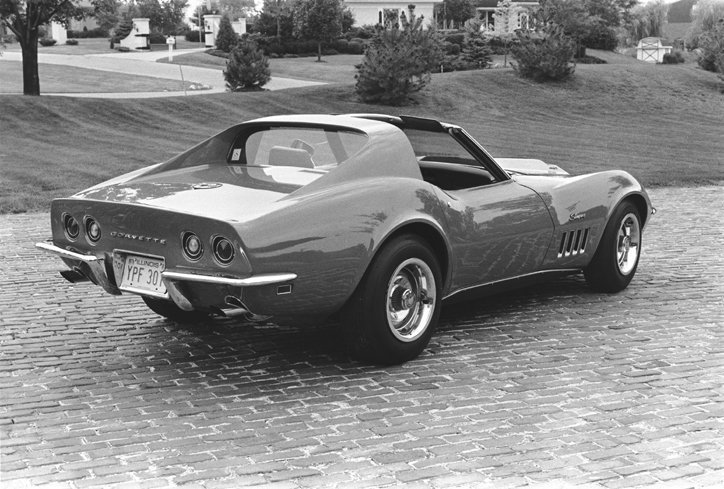