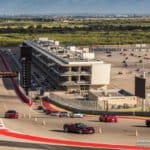 The Corvette Invasion started in Austin, Texas in 2013. It all began when Steve Pond of Houston contacted Shawn Jones of Austin and discussed getting their corvette clubs together for dinner. Shawn organized the event at the local restaurant on Lake Travis. What started out as a couple of clubs getting together, quickly grew to a large event including over 300 Corvettes owners coming out and showing their support.

In only four years, the event has tripled in size and continues to grow. Among the highlights is Danny Reed’s 1969 Astro Vette once owned by Astronaut Alan L. Bean. Live Music by the Clutch Kings and parade laps on the only F1 Track in the United States.

2017 will be one of the biggest and best events held by the Corvette Invasion team to date. We are estimating a record attendance of Corvette owners from all over the world.

For more details regarding this event please visit our website at www.CorvetteInvasion.com Corvette Invasion Corvette Car Show and Shine at the Circuit of the Americas in Austin Texas. Corvette Invasion Corvette Track Laps at the Circuit of the Americas in Austin Texas. Live Concert at the Corvette Invasion in Austin Texas.