The duo in the No. 4 Mobil 1/SiriusXM Chevrolet Corvette C8.R beat their Corvette Racing teammates Antonio Garcia and Jordan Taylor by 0.226 seconds in a non-points GTLM round of the IMSA WeatherTech SportsCar Championship.

The two Corvettes made their lone pit stops of the race three laps apart, with Taylor pitting first after 42 minutes. Tandy then stopped with a 55-second lead, and the gap shrank back to a little more than a second with 25 minutes to go with Garcia trying to run down Milner to the end before and after a late-race caution period.

Despite no points being available in GTLM, having Corvette Racing back on Belle Isle was of huge benefit on multiple fronts. For one, the Belle Isle appearance provided an opportunity for the hundreds of Chevrolet production team members who contributed in some way to the C8.R – and the road-going Corvette Stingray – to see Corvette Racing in-person. The reveal of the C8.R nearly 18 months ago was the culmination of almost six years of work between all facets of engineers and designers from the Corvette production side and Corvette Racing.

Second, it was Corvette Racing’s first IMSA event since March. With a busy stretch coming up in the IMSA championship over the next six weeks – plus the 24 Hours of Le Mans in mid-August – Belle Isle offered up a nice refresher on operations and procedures for the four drivers plus the crews and engineers.

Saturday’s race also was the first street race for the Corvette C8.R, and the team also collected valuable data ahead of the Long Beach street circuit in September.

Corvette Racing’s next event is the Sahlen’s Six Hours of The Glen on Sunday, June 27 from Watkins Glen International.

Note: You can find the 2021 WeatherTech Championship Schedule HERE

TOMMY MILNER, NO. 4 MOBIL 1/SiriusXM CHEVROLET CORVETTE C8.R – GTLM RACE WINNER: “The goal coming here was to keep the cars off the wall and learn as much as we possibly could about the C8.R on a street track. We did that. We did treat this as competition within our team to remain sharp and working through our processes. We did that with no mistakes in the race. We knew having Nick stay out longer than Jordan would help, and it did. There was a little traffic and then the yellow near the end to bunch us up. That gave us a little battle for sure. It was good for us to shake off the cobwebs and get ready for the long haul toward the end of the season.”

“Both cars are close as it is, no matter what. We expected a nice little race with the 3 car, which we got there at the start. Our pit strategy put us a little farther ahead and Antonio kind of made it back toward me for a nice little run to the end. I had no radio, which was not the plan! That’s about the only thing that went wrong for us this weekend. The crew could give me gaps (on a signboard). But I could see the gap to Antonio and could see he was getting closer. We had the yellow and I knew there were about six of seven laps to go. For us to learn a lot about the car and the tires in those situations is a benefit. It puts us back in a groove again. We’ve been off for so many weeks. It’s good for us as a team to shake the rust off and get our minds back into racing mode again. In some ways, it was a practice race for us before we push on for the last races.”

“That was mission No. 1, but the whole point of coming here was to showcase these Corvettes. We haven’t been here since 2008, so it’s a great opportunity for Corvette Racing to showcase these C8.Rs to the engineers and a lot of the people who work for Corvette Racing and Chevrolet. Their families were able to be here and see these cars. It wasn’t just about us driving on the racetrack. It’s about giving back to a lot of the people who make this race program what it is. It was an opportunity for them to see the cars up close and experience what these Corvettes are capable of and what they are working toward. Both cars are in one piece. From our perspective, job well done.”

The reception of Corvette on Belle Isle: “It’s a great opportunity for us as drivers and a team to interact with the many, many people who in some way helped to make these race cars or street cars, or someone else who works for Chevrolet or GM who has a hand in a different model than Corvette. The Corvette is a halo car and America’s supercar. It’s the pinnacle of what Chevrolet offers. It’s a chance to build excitement within those programs and for those engineers to get excited about what they produce. Fundamentally, this was high on the priority list for coming here and doing this race. We wanted to give them a good experience to see what they’re working on and had a hand in some ways so they can show their friends and families what they do. That’s what racing for a long time has been about – to showcase the latest and greatest in technologies. They can see the track-to-street correlation to see how close the race cars look compared to the street cars. They can see production parts that they helped build or design that are on the race cars. It’s a unique opportunity for GM and Chevrolet, and it’s a no-brainer for us to come to this race.”

NICK TANDY, NO. 4 MOBIL 1/SiriusXM CHEVROLET CORVETTE C8.R – GTLM RACE WINNER: “Not only did we complete the race and show off this awesome Corvette to everyone in the stands and around the track, but we also got a load of relevant information for the next time we are on a street track. This was the first time we’ve been on this type of track with the C8.R. What also was pleasing was how the whole weekend went operationally. The whole team was able to get back in the swing of things again before a busy summer. So yes, mission accomplished.”

“We had a good race between our cars. The start was interesting. We were three-wide in the kink before the start-finish line, and I was surprised to see this. But it all worked itself out. We learned a lot about what we need out of the car from a street track point of view. This is good. We had a restart with cold tires and it’s always fun when you have someone to play with and compete against, so this was good. Between the pair of us, we split strategies a bit; one car pitted early to avoid traffic, and we stayed out in the hope we could build a gap. We could see the differences in these kinds of strategic decisions. This is something that goes into a notebook. Fortunately for me and Tommy and everyone on the 4 Corvette, we get to celebrate in Victory Circle. We’ll take it as a victory, and I’m happy to be here.”

ANTONIO GARCIA, NO. 3 MOBIL 1/SiriusXM CHEVROLET CORVETTE C8.R – SECOND IN GTLM: “Every time you race, you find things. It’s great to now have laps on the C8.R around a street circuit. It’s good to do a race for the first time here because there is a lot of data to be collected. We raced hard and tried to get the most out of the Corvette while racing against each other. We proved that we were running fairly quick. I think I left my right-side mirror somewhere on the track! It was cool. It’s always great to race around a street circuit. Maybe we were missing some competition like we are used to, but it was great to be here in Detroit with all the people who work on and appreciate the Corvette. This has been a highlight weekend for everyone.”

JORDAN TAYLOR, NO. 3 MOBIL 1/SiriusXM CHEVROLET CORVETTE C8.R – SECOND IN GTLM: “It was a good experience. We had some new crew members over the wall for pit stops. We tried some new things on the car to help with reliability. There may have to been points but we learned a lot to take to Long Beach for another street course and of course Le Mans, which is the big one we are preparing for. So yes, a very good day for Corvette Racing.” 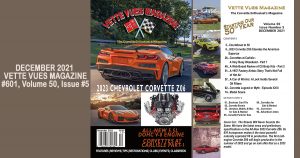 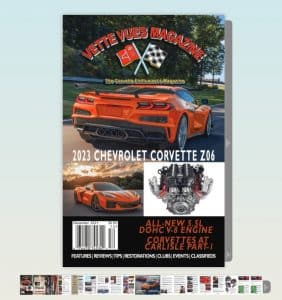 DIGITAL EDITION: DECEMBER 2021 VETTE VUES MAGAZINE, #601, Volume 50, Issue #5 If you are not currently a member of the Digital Edition section on our website you can subscribe here. BACK TO DIGITAL… 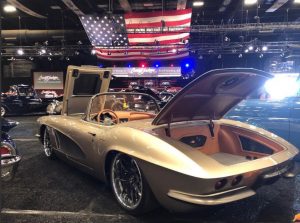 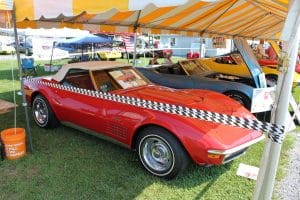 The 1971 Corvette is celebrating its 50th anniversary this year (2021) and today we are looking at the 50th Anniversary display at Corvettes at Carlisle this year.

If you are not familiar with Vette Vues Magazine you can check out our Recent Issues: