Oliver Gavin and Tommy Milner placed second in the sister No. 4 Corvette C8.R. It was the eighth victory at Road America for Corvette Racing, and the team’s first there since 2016. Garcia and Taylor both won for the first time in their IMSA career at Road America and extended their points lead to 10 in the class. Gavin and Milner unofficially moved to third in the standings.

Things weren’t looking positive for the first half of the race. Taylor, who qualified second, led early but the expected tire degradation reduced the pace for the GTLM cars. Adding to the problems for the team were electronics issues on the No. 4 Corvette that left both Gavin and Milner without traction control.

The predicted rain for the race came with just under an hour to go. Garcia, who took over with two hours left in the race, was the first GTLM runner to pit for rain tires and stopped from sixth place. Two other GTLM cars followed suit but three others stayed out, including the then-leading Porsche which skidded off-track during a downpour at Turn One.

Milner remained on slick tires during the first deluge as officials halted the race with 43 minutes left. The rain let up initially before cars returned to the track with about 25 minutes to go once the red flag was lifted. Following the final pit stops for wet tires, racing resumed with seven minutes left and Garcia in second place.

An even more intense rain began to fall with just minutes left in the two-hour, 40-minute race. Garcia was locked in a back-and-forth duel with Porsche’s Nick Tandy just before the GTLM leader and the third-place Porsche went off-track late in the lap. Both Garcia and Milner, who did a masterful job on a wet track with no traction control, were able to get through the chaos and took the checkered flag under a race-ending, full-course caution period.

“It was super tough. Because of the wave-by, we were at the back of all the GTD cars. So the spray we had back there was amazing. It was impossible to see anything. The first thing was to go by a couple of LMP2 cars while fighting (Nick) Tandy to catch up to the 24 BMW. It was a very intense three laps. I knew from Sebring practice that the Corvette C8.R was really good in the wet, even if today was beyond wet! I had Nick all over me, and we had many times when we were together… almost just sailing together instead of racing together. I knew the Carousel and the Kink were going to be really bad, and the line I took on the previous lap seemed to work. Luckily enough for me, it was the same and I was one of the few cars to make it through. It’s another 1-2 finish for Corvette Racing, which is amazing. It’s finally my first victory at Road America, so it’s been a very good weekend.”

WHAT DID YOU SEE OF THE BMW AHEAD OF YOU? DID HE SPIN ON HIS OWN?

“The Carousel and the Kink were almost impossible to go through that part of the track. There is really nothing you can do there. It depends on the depth of the water. The Corvette C8.R survived it better than the rest. I don’t know if it was due to the race line I took. I was following the car behind me and saw the BMW lose control. The race still wasn’t done because I had to do another lap through there. It’s a credit to how good the C8.R is in the wet. Thanks to everyone at Team Chevy because this car seems to be working in all conditions.”

HOW IMPORTANT IS THIS WIN TO EXTEND YOUR POINTS LEAD?

“We didn’t know starting the season how the C8.R would be. With the fourth at Daytona, we saw the potential of the car. Our team did a great job during the shutdown with fixing things that needed to be corrected. We’ve had a chance to win the last three races, and we’ve converted those. We need to keep putting pressure on everyone and make the rest of the field make mistakes. On our own, we need to be their in the end and maximize our points opportunities. The next one is VIR, where we have tested with the new Corvette. We will do what we can to keep this momentum and carrying on winning.

“It was a wild day…very unexpected. The race started off strong for us. We took a different strategy to go with three stops from the beginning. Thankfully it worked out well with the timing the rain and track position. Antonio never gave up. It was a tough fight in tough conditions, but he did a great job of surviving for our second win of the year and third of the year for Corvette Racing.”

THIS RACE WAS ON THE NATIONAL NBC NETWORK. WAS THIS THE KIND OF EXCITEMENT THAT WAS GOOD FOR NETWORK TV?

“It had a bit of everything. The start for me was exciting, and the battles were all good. I could see on the big screen across the frontstretch that the prototype battle was often exciting and had a little bit of everything with the strategies. The weather was a bit different for those who probably turn into NBC for NASCAR where they wouldn’t run in the rain. There were probably too many crashes for everyone’s liking, but the show was very exciting with the battle for the win at the end. You like to see that between the manufacturers.”

TALK ABOUT WINNING ON THE SAME DAY AS YOUR BROTHER (RICKY TAYLOR):

“It’s definitely cool. I think this is the first time we’ve won on the same weekend. I know we’ve gotten a pole on the same weekend, but in all the years a win has never gone both our ways. It was cool to watch their battle at the end with the 10 car. I know my dad’s team hasn’t won here either, and we tried hard for many years.”

“I take my hat off to the team every time for never giving up. It didn’t look like we were going to be finishing that high up in the dry. But as we all know, there was a chance of rain all around. In this part of the world when the rain comes, it comes big. You just have to take you chances and make the right calls at the right time. We got a little lucky with a few things, and ultimately the No. 3 Corvette made the right choice on the right tires at the right time. We didn’t quite get that break or make that decision at that time. But then as all the pit stops cycled through for that last restart, we knew we just had to flat-out race. Our car was compromised a little as we didn’t have any traction control as part of an electrical issue throughout the entire race that we couldn’t really get on top of it. I fought it all during my stints. I honestly don’t know how Tommy kept the car on the track when he driving around on slick tires behind the safety car. I mean… water that was three or four inches deep on slick tires with no TC was amazing. For us to come away, even with all the stuff that happened, with a one-two finish is pretty spectacular. Hats off to the team and the crew and also to the C8.R. It seems like it is a car that can live through some crazy circumstances and conditions on track and deals with it. It’s a very fine car.”

“That was absolutely wild. We had kind of a tough day to start with, but it came back pretty well for us there at the end. Credit to the guys with their never-give-up attitude that Corvette Racing is famous for definitely paid off today. The conditions were unbelievably difficult. The call to stay out there on slicks just before the full-course yellow was just as much mine as it was the engineers. I thought it was the right thing to do to run one more lap to see how bad the rain was going to be. And it ended up being almost biblical in the amount of rain that came. In all the races I’ve done, this has been the most rain I’ve ever seen come down at one time. It was hard enough just keeping it on the track under yellow with slicks, and it was bad enough when it was still green just trying to survive. Then it went red flag so we had the opportunity to come in and change it to rain tires. That in itself was difficult. For me, I knew I just needed to get to the pitlane and survive. That was the name of the game there and see what happened at the end. Once we went green, it was the most difficult conditions I have ever driven in my life with the amount of spray and with traffic and having so many cars around. At times it felt like I was driving blind. I could have closed my eyes and would have had the same amount of visibility at that point. I just tried to use every bit of muscle memory and track knowledge I could as to where the track goes at certain points. In the end, luckily we just survived with a first and second for the team. The day didn’t start out well, but it ended as well as it could.”

(Not having traction control) “Because I didn’t have it from the time I got in the car, I had to manage it from the start. In the dry, it’s definitely difficult because you are trying to not use the rear tires too much. I felt like I did a decent job in that first run but driving in the wet without it makes it that much more difficult. To be honest, the Corvette felt really good in the wet. Even though we don’t have a lot of time in the wet, the guys made the right call with tire pressure. When the Michelin wet tires are new, they’re really good. That gave me the confidence early on to really push, get through traffic, and trust in the car and tire to find the fastest way around.”

Here are some other blog posts you might enjoy… 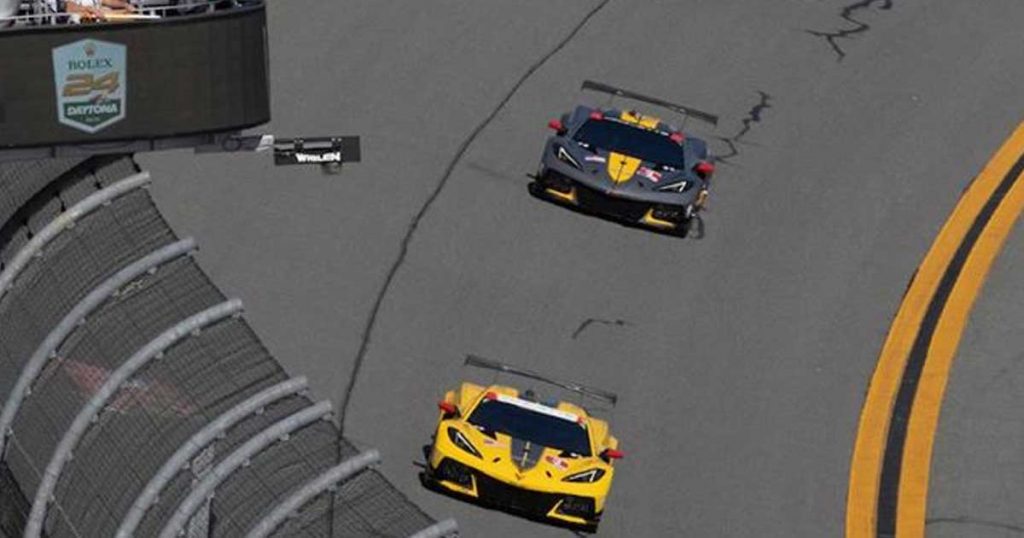 September 12, 2020 Corvette News and Archives
The IMSA has released the provisional schedule scheduled 12 weekends for the 2021 WeatherTech SportsCar Championship season tart in Florida and finish in Georgia.
Read More 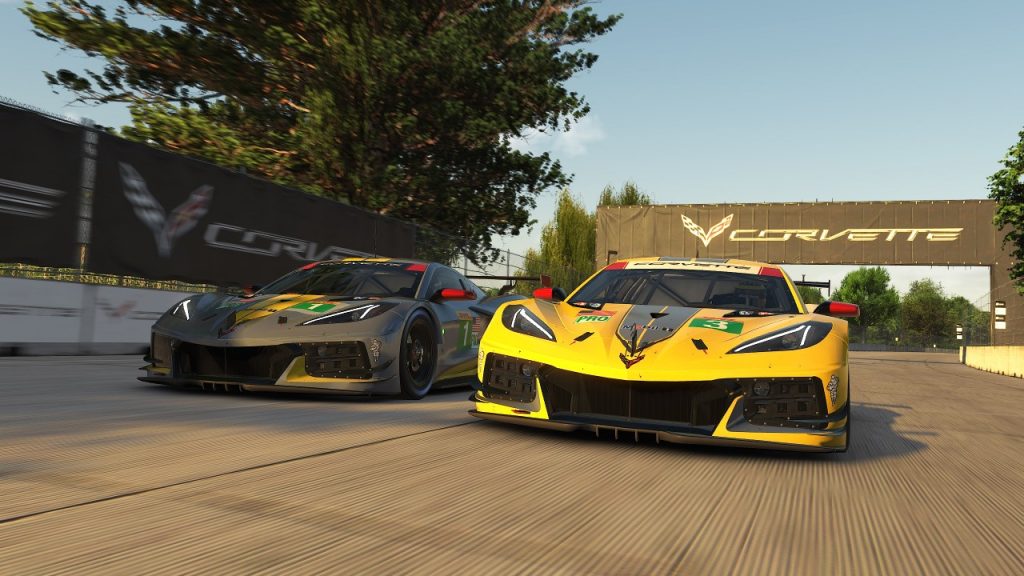 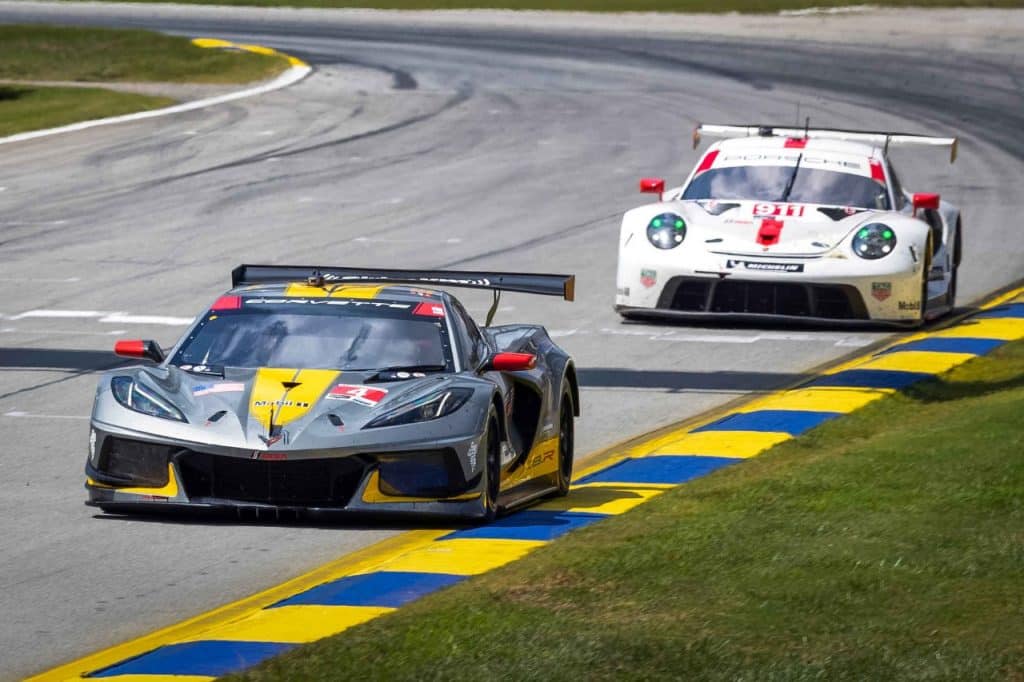 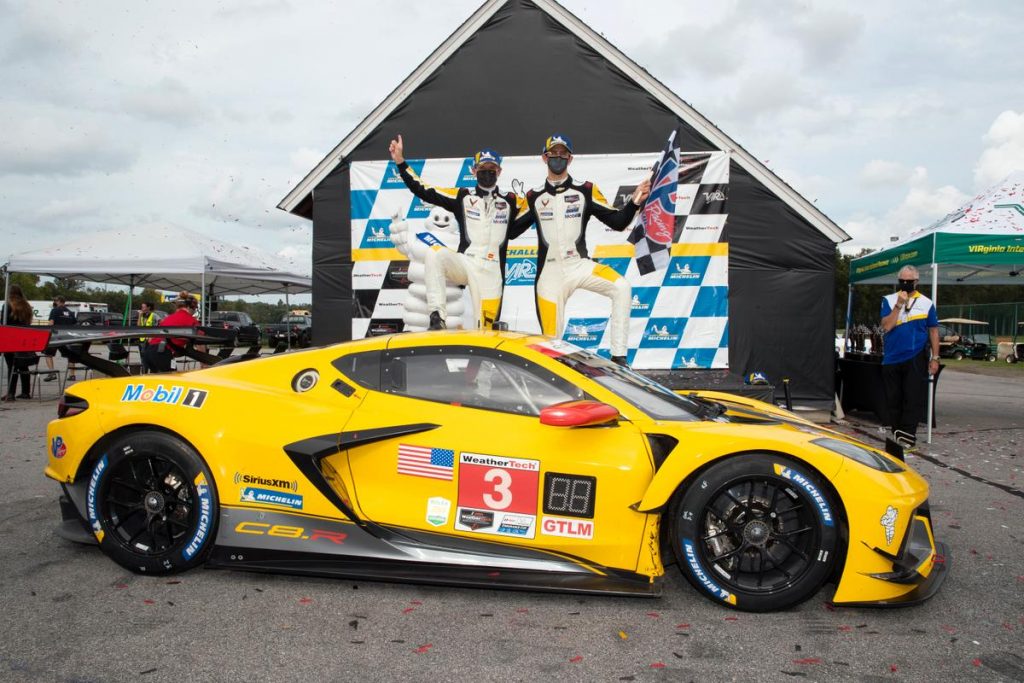 Corvette Racing Wins Three for Three: No. 3 Corvette Gets Third Win of 2020 in IMSA GT Challenge at VIR

August 23, 2020 Corvette News and Archives
Congratulations to Corvette Racing for their third win in a row in the IMSA GT Challenge at Virginia International Raceway! This makes three for three…
Read More 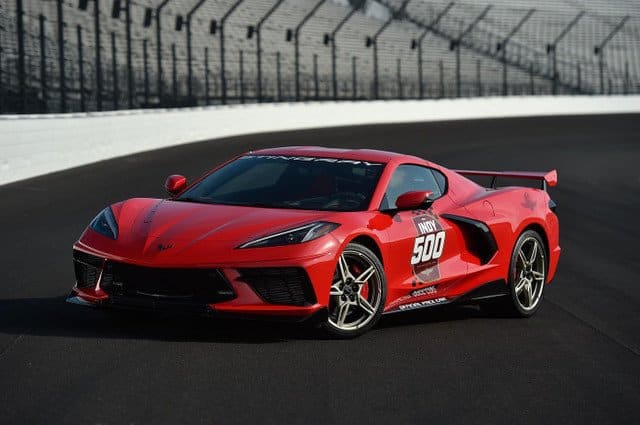 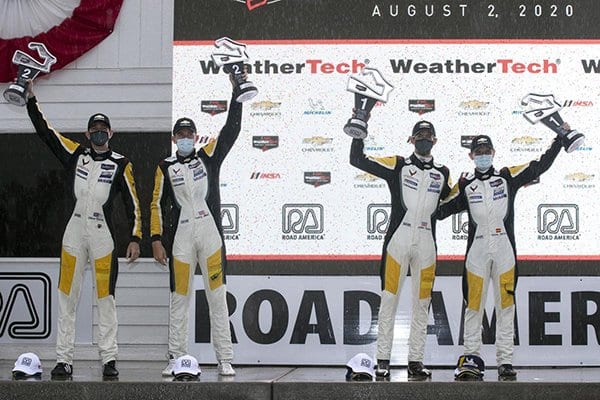 Vette Vues is the Corvette Enthusiast’s choice in Corvette magazines since 1972.  It is full or Classic, Vintage, and current model Corvette information.