In this article, we look at the 1953 Corvette Magazine ads.  We also look in our Rear Vues at what was happening during the time with a little 1953 Trivia. 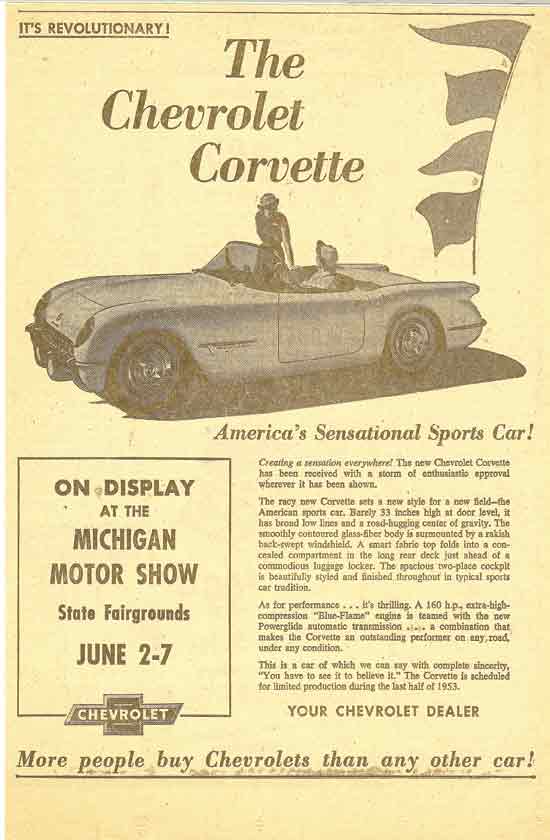 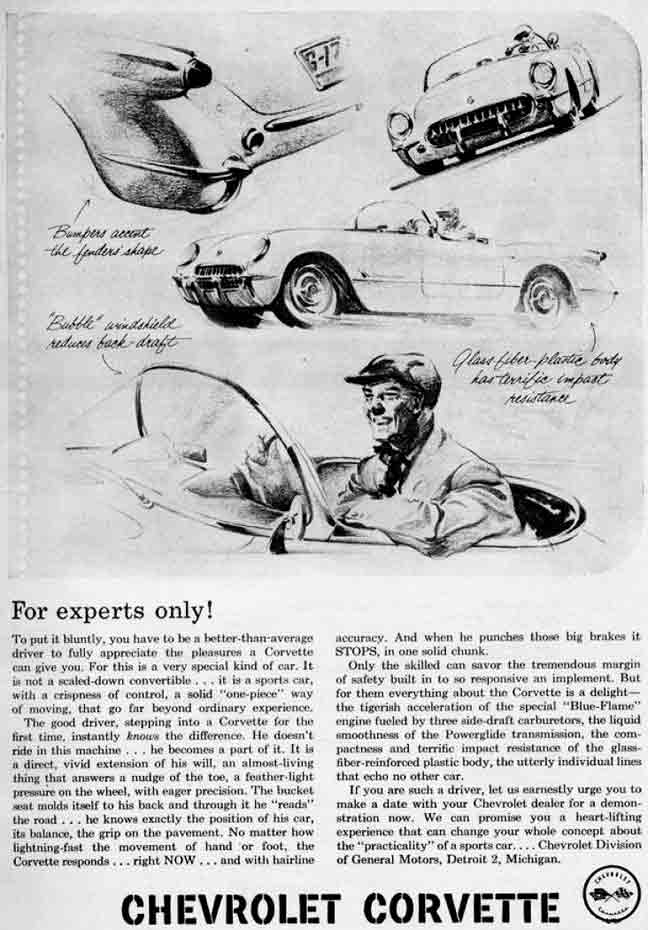 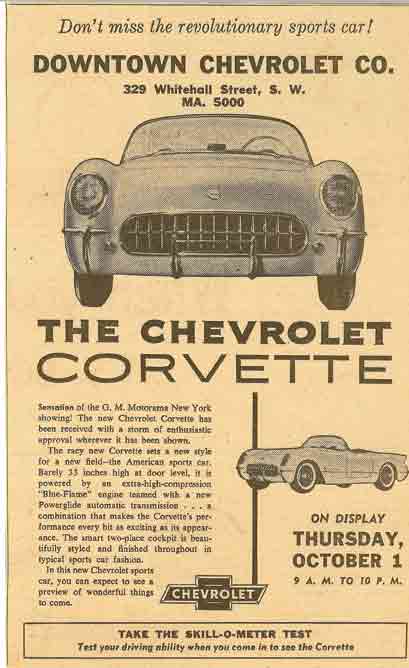 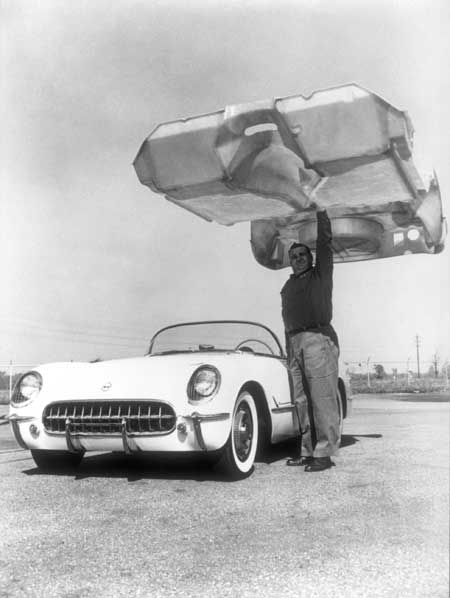 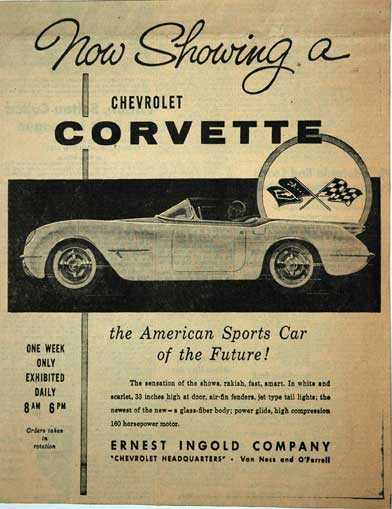 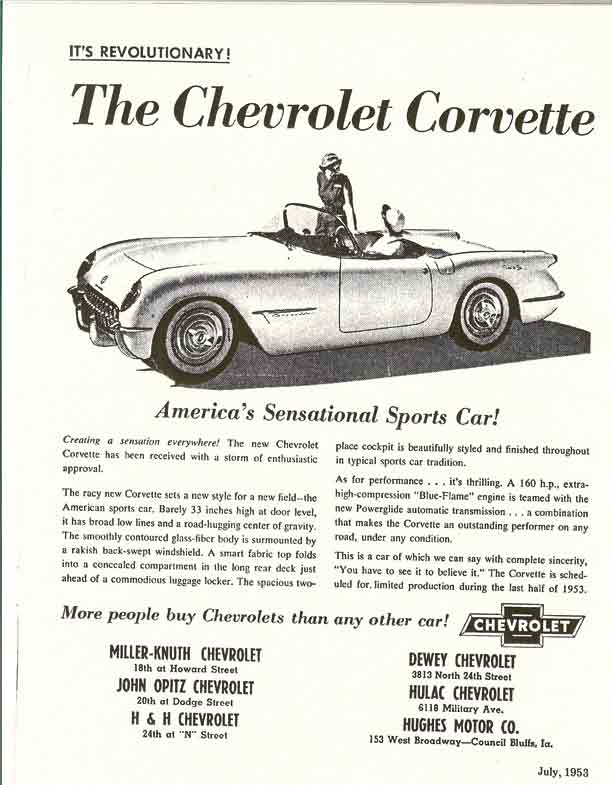 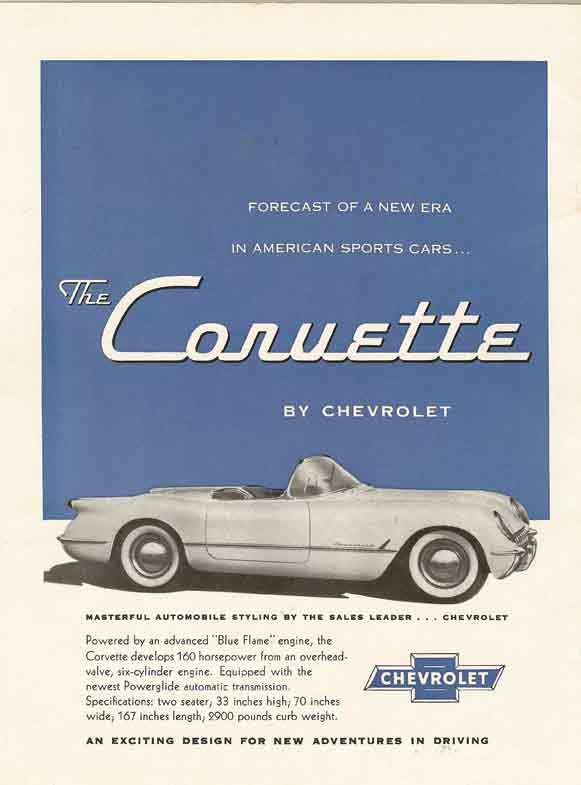 As we look at the 1953 Corvette Magazine Ads, we thought you might enjoy a little trivia about what was happening in 1953.

Publishing has always been difficult.  In 1953, a new publication came on the scene.  Its publisher borrowed $1,000 from his mother and a few others to start it in a Hyde Park kitchen (Chicago). The first issue came out in December but was undated, because they were unsure if there would be a second issue.  The issue sold out in weeks for a price of $.50 per issue.  The circulation was 53,991.  The magazine’s first centerfold was Marilyn Monroe.  You guessed it, Playboy.  I might mention, if you did not get this issue, you could buy it on eBay for $29,995.94.

Now, this was a good year for the men.  Life expectancy was only 68.8 years, but that was about to change.  The first successful open heart surgery was performed in Philadelphia…with the new Playboy magazine; this was good timing!

Hank Williams had the hit song “Your Cheatin’ Heart.”  Other hit songs included “Crying In The Chapel,” “Mend Your Ways,” “Please Don’t Leave Me,” Hum…

In 1953, Bill Haley & His Comets recorded “Crazy Man, Crazy” became the first rock and roll song to hit the American charts.  This was not without controversy, Rock & Roll was considered by many to be an evil influence on Children.

If you were a teen, you were probably trying to convince your mom that the black leather motorcycle look was ok. Thanks to James Dean and Elvis, this was the new fad!

Unfortunately, Westinghouse did not sell the first color TV until late December ($1250).  The shows that were popular included I Love Luce, The Roy Rogers Show, Death Valley Days, The Ed Sullivan Show, The Texaco Star Theater, The George Burns and Gracie Allen Show, The Jack Benny Show, and The Adventures of Ozzie and Harriet.  Some shows that ended in 1953 were Amos and Andy, Victory at Sea, and The Ernie Kovacs Show. In 1953, the New York Yankees won the World Series.  They defeated the Brooklyn Dodgers 4 to 2.   Indiana who defeated Kansas 69 to 68 won the NCAA (National Collegiate Athletic Association) Basketball Championship.

Now the football results are a little confusing to me, but I’m sure you guys will know what it all means.  So, here is what I found: the final rankings for the NCAA Football Champions were made on November 29.  This was after the regular season and without consideration of the postseason bowl games.  The 1953 college football season finished with the Maryland Terrapins capturing the national championship. So Maryland Terrapins were #1 (10-0-0), #2 was Notre Dame Fighting Irish (8-0-1), and #3 was Michigan State Spartans (8-1-0). Now that base Corvette that you would have paid $3,498 for is selling for $175,000 to $235,000 these days.  Perhaps some of our mathematical readers/engineers are figuring out which was the best investment. Photo of Marilyn Monroe and Joe DiMaggio from the cover of the January 1954 issue of Now magazine. By Copyright not renewed (eBay cover) [Public domain], via Wikimedia Commons

Here is a list of other Vintage Corvette Magazine Ads:

⇒  Here are some more articles you might enjoy…

Do you like videos?  Here is a promotional film from Chevrolet details the design and engineering features of the 1953 Corvette. As it was created prior to the introduction of the production car in June 1953, the car shown is actually the original Motorama Corvette show car which can be easily identified by unique front fender trim and the “Corvette” script on the hood.